Around the World in 14 Days! 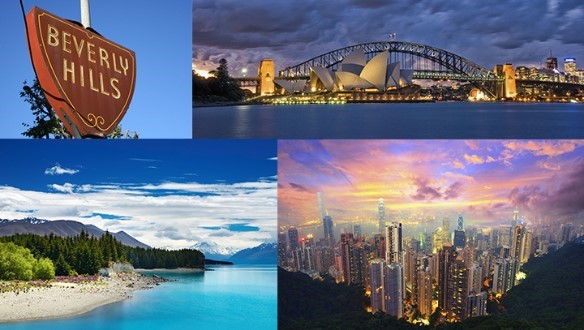 From the age of 18, I always wished to travel around the world and during May 2013 I was extremely fortunate to be offered a trip with 9 other travel agents on a once in a lifetime opportunity to travel around the world. We flew with Air New Zealand, from London Heathrow to LA, LA to Auckland, and every journey offered unrivaled service. The in-flight entertainment from Heathrow to Los Angeles was one of the best I’ve ever seen. I could order drinks from my seat myself without pressing buzzers. If you are looking to treat yourself you can upgrade to a sky couch (3 economy seats that become your own personal sofa). You are provided with a mattress, duvet and pillows so it's perfect if you want to sleep. Ideal if 1 adult is travelling with 2 children.

Once we arrived in LA our first stop was the Hyatt Regency Huntington Beach. This hotel is a fantastic place to relax and enjoy the Californian beach scene. Hyatt Regency Huntington Beach is the only hotel on that stretch to have a bridge running over the highway to the amazing golden beach, and all guests receive $25 resort credit that includes bottled water and a shuttle to Disney. Following a fantastic breakfast and a tour of the property we headed to the surf shop “Toes on the Nose” and I eagerly anticipated my first surfing lesson. To complete the experience we headed to Sandy’s Beach Grill for a mojito and a spot of lunch while watching a distinctly Californian cocktail of volley ball, tight rope walkers, bikini clad skaters, muscle men and joggers.

We stayed in the Westin Bonaventure with 4 elevators that break through the roof of the lobby, giving you views over downtown LA. The Westin has an indoor running track and a new concept called Pack Light-Get Fit. They supply you will your whole gym kit, so unfortunately there are no excuses. All the LA sightseeing can be achieved with a $5 day pass on the Metro! California Science Centre: I cant believe that something so interesting and engaging is completely FREE! This piece of history is an outstanding experience, especially considering that the Science Centre is now home to the Space Shuttle Endeavour. Starline Hop on Hop Off - There is one in every major city in the world, but none that take you to such iconic places as Beverley Hills, Rodeo Drive, The Beverley Wilshire, and Santa Monica. An open top bus which allowed us to do some star spotting.

Mondrian West Hollywood: Like falling down the rabbit hole, this hotel is very LA: white, chic, mirrors that work as televisions, and a rooftop sky bar. The highlight has to be lunch in “Asia De Cuba” located on their rooftop terrace overlooking Hollywood. We hopped off for the last time at the Farmers Market, home to 101 stalls selling everything from hot sauce to handmade peanut butter. Just over the road was The Grove, a New England Inspired shopping village. We enjoyed a little retail therapy and headed to Mixology for a cocktail. You can’t go to LA without visiting Universal Studios. A walk around the sets meant walking up the steps of Town Hall from Back to the Future and a meander around Wisteria Lane. We also got a tour of the props and over 1 million costumes that they store at Universal.

Now on to Auckland - we stayed at the Hilton Auckland, situated right on the harbour, offering amazing views over Auckland. The Hilton Auckland was modern and had a stylish cosmopolitan feel to it. You must try the restaurant FISH, as the Head Chef Simon Gault is somewhat of a celebrity in NZ, and his menu offers exquisite food that will create delicious memories of Auckland. Also, when in Auckland I can highly recommend a company called Bush and Beach. They arrange city tours, vine yard tours, and trips to Hobbiton.

We were fortunate enough to climb The Auckland Bridge. From the summit we saw crazy bungee jumpers flying off the bridge however I was more than happy soaking in the views of the city. We were treated to a trip to Hobbiton, a place where I felt at home being 5ft2 and a half. For non Lord of the Rings fans Hobbiton is a set used for the filming of the Lord of the Rings and The Hobbit films. It is set in farm lands in the north of NZ, in a place called Matamata AKA Middle Earth. The story goes that Peter Jackson was looking for a lake with a tree by it (which would later become the party tree) in the middle of a landscape that was untouched by the modern age. After much flying around in a helicopter they came across the Alexander Family Sheep Farm. They knocked on the door and the rest, as they say, is history. The farm owners asked that the set designers leave the Hobbit holes intact so people could come and enjoy them. We drove for 2 hours from Auckland to get to Hobbiton, and the spectacular scenery was like the rolling green hills of home but on a much more impressive scale.

We spent our stay in Sydney at Langham Hotel. Tucked into the back streets not far from the infamous “The Rocks” shopping area, Langham Sydney was classic in design, with wide sweeping corridors, opulent décor, large rooms with smart, chunky furniture, and some great views over Darling Harbour. Although I visited Australia on a few occasions I've never made it to Sydney and was excited about climbing the Harbour Bridge. There are 2 different climbs you can participate in and we opted for the shorter one which was one and a half hours. We made it 134m above sea level, right in the heart of Sydney Harbour for uninterrupted views.

The 1 thing you MUST do above all else while in Sydney is to see the city from the water. We joined Sea Sydney Cruises and the Calypso for a 4 hour yacht ride around Sydney Harbour. The Vivid Light Festival was taking place during our stay. This is dotted around Sydney Harbour, The Rocks, and Darling Harbour. It brought together countless artists and different light installations. Technicolor lights were even projected onto the Opera House. Hot Tip: If you want the ultimate in luxury experiences in Sydney look no further than The Shangri-La Hotel. We ate in their restaurant Altitude. It is on the 36th floor and has 360 Degree views of Sydney taking in the Opera House and the Harbour Bridge. We sampled a tasting menu where they paired the food and wine to perfection.

After Sydney we were on our way to Hong Kong for the last stop on our journey. Hong Kong is very westernised but is still full of its own unique charms and charisma. If, like me, you’re eager to explore exciting new cities then the Hong Kong metro system is a good way to get around, as it is cheap, clean, and easy to use. I was most looking forward to seeing more of the cultural side of Hong Kong outside of the city, so I was glad we went to Ngong Ping Village and got to visit the Tai O Fishing Village, the Tian Tan Buddha and the Po Lin Monastery. You reach Ngong Ping by cable car where the views were spectacular. I loved learning about the Buddhist religion, I did however get a shock when I went on my iPhone and noticed free WiFi! I suppose even Monks need to check their email.

We then got a bus down to the Tai O Fishing Village on Lantau Island. The people of Tai O live in stilt houses, but our tour guide explained that this way of living is dying out as their children grow up and go off into the corporate world. The most exciting part of the day was seeing Pink Dolphins jumping out of the water. For the ultimate dining experience try Shangri-La Kowloon Michelin two-star Shang Palace. It was the best Chinese meal I’ve eaten. There is no denying that everyday I pinched myself. Eternally grateful for this ‘trip of a lifetime’.