Fairy-tale to folklore – cruising the Rhineland 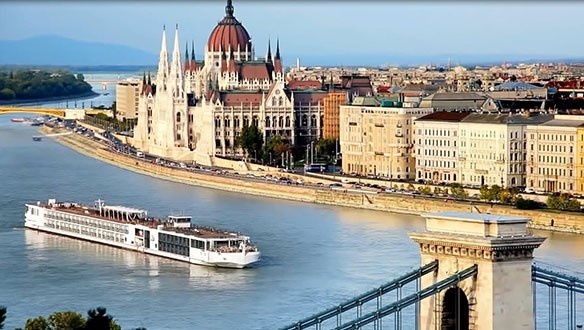 The Rhine River borders six countries: Austria, France, Germany, Liechtenstein, The Netherlands and Switzerland and is arguably Europe’s most scenic river route. As you cruise along the Rhine you will encounter fairy tale castles and vineyards, several Roman ruins and cathedrals. Make sure you take earphones with you as you pass Lorelei Rock, as legend has it that sirens have lured sailors to their deaths here.

Many cruises will begin or end in Amsterdam, allowing you time to view the city of cyclists. From a harrowing visit to Anne Frank's House to one of the 50 museums and endless canals, you will be spoilt for choice. The best thing to do in Amsterdam is to walk along the streets and get lost in the city. ‘9 streets’ is a great place to do this, the area consists of nine streets that cross each other and here is where all the vintage shops and little cafés can be found.

The best thing to do in Basel is eat! Due to its location between Switzerland, France and Germany, it has many restaurants offering an array of European dishes. Don't miss a stroll around the lovely botanical gardens to help burn off all the food!

As if transported back in time, Strasbourg will wow you with its cobbled streets and medieval houses. A must-see is the iconic Strasbourg Cathedral de Notre-Dame, which was the tallest building in the world until far into the nineteenth century. Here you will find the cathedral’s astronomical clock, which is an incredible creation of mathematicians and artists. Be sure to visit the clock at 12.30pm!

Cologne's Kolner Dom is an impressive church and the view from the top is a highlight of the area but you must walk up over 500 steps, so only begin the ascent if you are confident that you are fit enough to reach the top, it is not an easy climb! Reward yourself after with a trip the chocolate museum or with one, or several, of many beers offered in Cologne.

A river cruise is a great way to incorporate several countries in one trip. A holiday where you can fall asleep in one country and wake up in another. Relax on deck after cycling around Amsterdam and watch the scenery go by as you arrive in Cologne with its imposing cathedral, before continuing through picturesque towns across Germany. River cruises allow you to explore these areas either on your own or as part of a tour with cycling tours available in Amsterdam, wine tasting at one of the several vineyards and evening walks through medieval towns that appear frozen in time from an era only usually seen in fairy tale books and historical legends.

As your river cruise carries you through this historical and important route there are surprises around every bend. Sail along with Germany on one side and France on the other in a sandwich of charming villages and rolling hills. With famous legends, such as Beethoven singing the praises of the Rhine River and the beauty of the area, you can’t go wrong.