Istanbul - A Tale of Two Continents 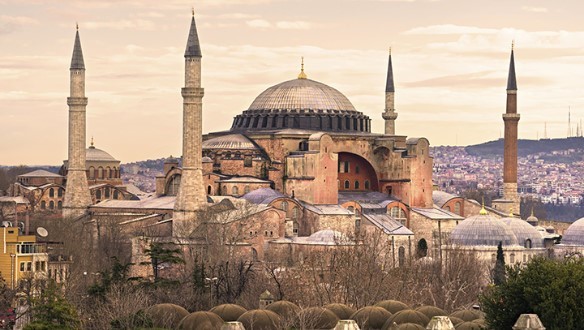 As the call to prayer rings out across the streets of Istanbul I feel at home, transported back to a past life. There is nowhere that has made me feel more at home than Istanbul in Turkey. I was lucky enough to be able to stay with friends who know their way around which was a massive help as I only had three days to see the entire city. As anyone who has any knowledge of Istanbul will know, this is not really a feasible task as there is just so much to see. Spread across two continents and divided by the famous Bosphorus River, the city is colossal with a great mix of things to see.

I stayed in the Beyoglu district of Istanbul which is a great base from which to explore places such as the Galata Tower. It is situated in the middle of the European side and is filled with great cafes, restaurants and shops. There is something for everyone here ranging from quirky antique shops and book stores to modern exquisite restaurants and high street stores along the pedestrianised road of Istiklal Caddesi. The area has frequently been compared in the media to Soho in New York and is definitely worth a visit, even if you are not staying in this quarter.

The main reason tourists flock to Istanbul is to visit the Old Quarter where you can find Hagia Sophia and the Blue Mosque. As soon as I arrived here I could see why, as the rising minarets and vast domes create a skyline which is now lost in most modern cities.

“Glory to God that I have been judged worthy of such a work. Oh Solomon! I have outdone you!” The words spoken by Emperor Justinian who had the idea to build Hagia Sophia seem extremely pompous but you realise they are completely justified as you walk through the gargantuan ancient doors. I immediately felt humbled by its sheer size and architecture and if I had been responsible for its creation I would have been shouting it from the rooftops (or domes) too. It was originally a church, later converted into a mosque and now acts as a museum. The building has clearly been a focal point in the country’s transformation over the years from Constantinople to Istanbul. From the outside it appears as a bit of a hotch-potch of structures all piled together in a haphazard way but the second you enter this incredible structure, all aspects of its architecture work in perfect harmony to create a truly unique building.

Directly opposite Hagia Sophia is the Blue Mosque which is equally remarkable. The queue here was almost as impressive as the building so allow enough time to visit. There is another entrance which is for the locals who are going to pray, a few tourists managed to slip through but I wouldn’t advise this. You are expected to remove your shoes and cover your hair when you enter the mosque and they provide you with a shawl and bags for your shoes. Although the interior was as incredible as the exterior I did feel a bit awkward gawping at the domed ceilings while people were trying to pray, but it is definitely a must-do when in Istanbul.

In the same area you will find the relatively undiscovered Basilica Cistern. It is a maze of ancient cisterns that run under the city - this may sound pretty dull but it was one of the highlights of my trip. The water, the columns, the large Koi fish and the lighting all add to the unique ambience, it is a great place to visit and a photographers dream! Expect to bump into a lot of children if you go during term time as it is a popular destination for school trips in the area.

A short walk from these main sites is the famous Grand Bazaar…a hagglers dream. As you walk through the maze of narrow walkways all lined with unique shops selling everything from spices and coffee to silver and shisha pipes you feel as if you are at an Arabian souk. We stopped at a coffee shop here and I ordered a Turkish tea. It arrived on a gold tray, in a gold cup and with a shot of alcohol and a glass of water and lemon. It even had a small gold pot with sugar in. The presentation was in complete contrast to my surroundings but when it comes to Turkish tea they don’t mess about! The Grand Bazaar is a place of contradictions. To the onlooker it can seem a bit hectic and as we stopped at a kebab stall I was a bit sceptical. It looked like somewhere I would stumble on past even if I was drunk after a night out, but I put my faith in my friends…they live there after all and I was so glad I did! It was one of the best kebabs I have had. This is one of the things I loved about Istanbul, one minute I could be eating a kebab at a suspect looking shop and the next dining at an expensive restaurant and yet I was never disappointed by the hospitality of the people, the food itself and the diversity of the city.

Speaking of great food we had brunch by the water in the area of Ortakoy one morning at a place called ‘The House Café’ – a chain of café’s in Turkey – and they served excellent food in a perfect setting. Despite it being freezing cold as I went in November, the sun was shining and we walked along the Bosphorus and past a small outdoor market that was selling fruit, jewellery and really creative stone sculptures. Another restaurant that I would definitely recommend is ‘Zipkin’, it is a fish restaurant situated in Arnavutkoy and has one of the most incredible views of Istanbul and the Bosphorus Bridge. It is located on the sea front and has glass windows on all sides allowing you to watch the ever-changing colours of the bridge and the passers-by on the street below. The food was outstanding and that is coming from someone who doesn’t even like fish that much – I have since been converted!

If you are lucky enough to be able to afford designer clothes or just like to window shop, head down to Nisantasi which is a very upmarket shopping area and has everything from Luis Vuitton to Tom Ford. The valets will park your car in the car park for you leaving you to wander around the shops and cafes carefree. It was a lot more relaxing and forward thinking than a day trawling the shops in London!

As my time was so limited we chose to visit Topkapi Palace as this is the most famous one that I had been overly excited to see. For any girls wondering which palace to go to if you are short of time, this one houses one of the top 5 largest diamonds in the world – yes, I thought that might sway you! As you wonder through room after room of luxurious upholstery, fascinating clothing and jewel encrusted furniture you begin to feel slightly envious of the Ottoman Sultans. Not only are the rooms decorated in the most beautiful and typically Turkish way but the views from the palace are spectacular. With a panoramic vista across the Bosphorus and both the European and Asian side of the city, it is a great vantage point from which to take a photo for your Instagram, Pinterest, Facebook, Twitter…you get the drift.

When I got back from Istanbul and my friends asked me how it was, the only thing I kept saying was that I could happily live there. Having stayed in someone’s house rather than a hotel it probably made that bold statement easier to say with genuine truth behind it but I completely understand why my friends decided to move there. If you get the chance you have to visit, it will either be everything you imagined and more or you will be pleasantly surprised!