My River Cruise Experience in 24 Hours 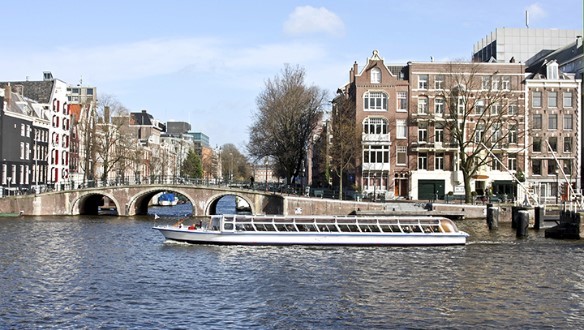 When I was invited by APT to join them onboard AmaSonata in Amsterdam for 24 hours in March, I was very quick to accept. River cruising is extremely popular and the numbers of new vessels is growing each year, however this was a product I knew very little about so was very keen to sample it so I could make recommendations to my clients. The joy of river cruising is that you can pack and unpack once but visit so many beautiful places during your trip. It’s not about rushing here and there as although you visit key sites you also have time to relax. You can relax on an open deck where the shoreline is always changing. I flew from Leeds to Amsterdam and was transported to the ship which took around 30 minutes, however where the ship docks it’s just a 10 minute walk from the train station so I guess you could arrange transfers independently.

Upon arrival, the reception area housed a glass elevator and the general atmosphere was elegant. I was then shown to my cabin and was pleasantly surprised by the amenities. My cabin for the next 24 hours was bright and spacious around 210 sq. feet, it had a twin balcony concept with both a French balcony and a separate outside balcony with two chairs. All cabins are equipped with an ‘infotainment’ system which includes complimentary internet access, a large selection of both films and music to suit everyone’s taste. Other amenities include flat screen TV’s, air conditioning/heating, bathrobes, safe’s, mini bar with complimentary water which is replenished daily and an umbrella (just in case!)

Now it was time to sample lunch. There are two restaurants on board, however during the summer months lunch can also be served outdoors on the sundeck. The smaller restaurant is at the rear of the ship and offers magnificent views for more of an intimate dining experience. The food is exquisite and is accompanied by complimentary fine wines during both lunch and dinner. During lunch we had already started sailing to Hoorn.

After lunch it was time for presentations in the lounge area from both APT and AMA Waterways which were extremely informative. Complimentary tea/coffee is served throughout the day in the public areas. After the presentations I walked around Hoorn which was a delightful cobbled town with quaint shops and buildings which were certainly not at 90 degrees, the town is full of history. Often ships dock in towns so you can easily walk to cafe's or shops or markets and mingle with the locals or head off on an organised tour. The great thing about European Rivers is that they are lined with paths and are relatively flat which is ideal for cycling, therefore AMA Waterways carry bikes on board so you can cycle and explore new destinations either independently or on an organised tour. They also provide you with a helmet. Excursions are organised at each stop and cater for all levels of fitness ‘active, gentle and late risers’.

The public areas featured a main lounge with bar area and panoramic windows to enjoy the passing scenery, a sun deck with heated pool and swim up bar, a walking track to burn off the calories, outdoor chess set, library, fitness room, massage and hair salon. Whilst river cruising is for grown ups with a plus 55 age group (children are a rarity), I felt that on this particular ship travellers in their 40’s would feel at home particularly as it was a contemporary, offered fine dining, offered the opportunity to explore destinations independently by cycling plus the infotainment system in the cabin was fabulous. With river cruising you get to include ‘bucket list’ places, cities such as Vienna and Budapest. Cruises on the Rhine and Danube are most popular however Russia’s Volga, China’s Yangtze, the Mekong and Mississippi are becoming popular. Whereas Myramar is the ‘in’ place to be, this year. Overall, although it was only 24 hours it was a stunning experience.